The Women Behind the Brand: International Women’s Day 2021

The pandemic has been a game-changer for women all over the world. As boundaries between work life, family responsibilities, relationships, and personal wellness blur, there's never been a greater need to celebrate and support other women.

This International Women's Day (March 8th), we're taking the time to look at the amazing work that Stephanie Essex is undertaking with her company, Flyhawk. The brand has dedicated itself to empowering the global netball community, representing 20 million people globally and female fitness enthusiasts.

Please tell us a bit about yourself up to now.

I am a former Superleague Netballer turned self-taught designer and brand builder! For ten years, I worked as the Creative Director of Bournemouth 7s Festival, and Managing Director of another sportswear brand before that was sold to an external company, bringing my journey with the brand to a natural end. I've always been passionate about women's sports, especially netball, given my background. After leaving my previous roles, I spent some time away from my desk exploring Australia as my best friend played professional netball over there. I caught up on life and recharged before a global pandemic brought that fun to a halt! 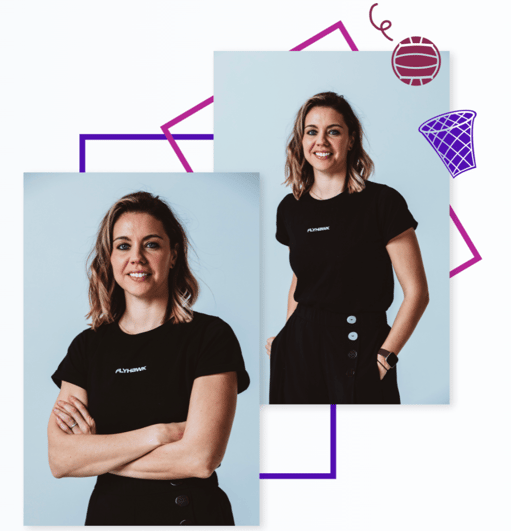 Flyhawk is proud to be a market-leading brand for the global netball community. What does community mean to you and its members?

For me, the community is all about creating that sense of belonging; it's a space where your voice can be heard, your needs addressed, and where energy and inspiration are transferred between like-minded people. A community that you can inspire but also you can be energised by when you need a boost. As a brand, we wholeheartedly represent everyone involved in the sport as we believe netball belongs to everyone, so all ideas and opinions are welcomed.

What was your motivation in setting the brand up?

During my year out from the sportswear industry, I had time to sit on the sidelines, so to speak, observing, researching, and listening. I was baffled about how time and time again the female sports market is often ignored or under-represented, so I created Flyhawk. Netball, in particular, is often a bolt-on sport for many 'multi-sports' brands, and female teams often get sold men's fitness products. Something had to change. 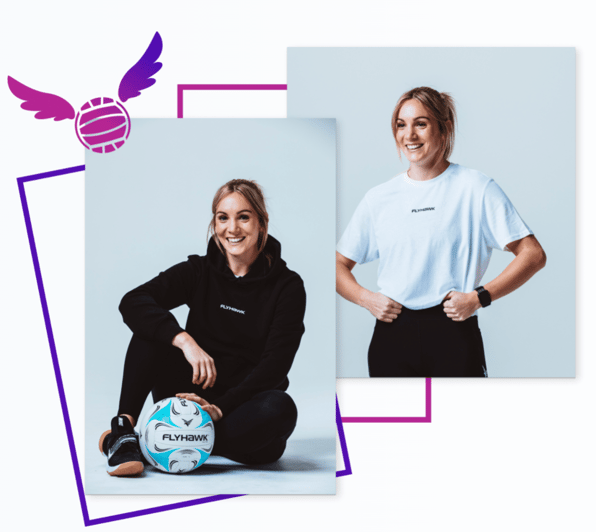 Who is your biggest source of inspiration?

I think, first and foremost, my biggest inspiration came from seeing how receptive the netball community is. I've had so many messages of support since setting up the brand from people within netball saying how it's fantastic that someone has finally created an aspirational brand for the sport. So, the biggest source of inspiration comes from seeing the buzz across the netball world. I'm also really inspired by brands that have found their niche and are nailing it, such as Rapha, the cycling brand, or Canterbury and their dedication to Rugby. I also recently learned that a distant relative who I haven't met owns the custom speed-focused cycling brand 'Nopinz,' which has a really cool story to it! I just love the concept of owning your niche market and not trying to be all things to all people.

How important are leadership, collaboration, and empowerment in what you do?

I think all three are important and go side by side, but working with great people is the key focus, and the collaboration and empowerment part will follow. Collaborations can help teams achieve so much more, which is why we have partnered with London Pulse Netball Superleague team for the next three years. Sam Bird, the CEO, is a fantastic leader and has got the best people and partners around her to help drive netball forward. Because we also want to raise the bar for netball, working together means we can get there quicker, together!

You've got the backing of some incredible ambassadors, including Serena Guthrie MBE, Natalie Haythornthwaite, Jade Clarke, and Stacey Francis. What inspiring lessons have you learned from these athletes?

Our ambassadors resonate with our core values while making history in netball and women's sport. The biggest lesson I have learned from them all is that it takes time and a lot of hard work to become the best, and you need to stick at it even through tough times when you want to throw the towel in. Some of these athletes have experienced disappointments of not medalling in major competitions but, through perseverance, then went on to win a gold medal at the 2018 Commonwealth Games, which was incredible for netball in the northern hemisphere.

Times have changed, the narrative around what women are capable of has evolved, but significant equality issues remain. What challenges have come across as a businesswoman and athlete striving for change within the industry? And what are the major success stories of your time, so far, at Flyhawk?

Because sportswear, in particular, is quite a male-dominated industry, it surprised a few people when I launched Flyhawk and became my own boss.Women are fantastic employees, very loyal and competent, but often it is assumed that the business owner is likely to be male. Because of this, launching a female-founded sportswear brand without any external funding was a real achievement, but so was selling out our online shop launch collection within 48 hours! I wasn't expecting a huge number of sales but seeing the number of online orders that came in straight away made me realise we have genuinely created a brand that has been welcomed with open arms by the women's sports community.

Future pacing your company, where would you like to be in a decade?

I would like Flyhawk to be the number one netball brand globally across both sportswear and equipment. Number one doesn't necessarily mean the biggest, but it does mean the best.

On a different note, COVID has separated a lot of us from our loved ones. Some women are finding new and creative ways to cope. Others are struggling through each day as it comes. How have you found lockdown, and what have you found particularly helpful?

I actually enjoyed the first lockdown last year across the summer months as the weather was nice, and it was a bit of a novelty. I live in Bournemouth, so I was able to get out for some beach walks and runs, but this latest lockdown is dragging a bit as it's dark and cold. I find it helpful to try to keep weekends relatively work-free, and my friendship group has started doing Zoom after-work drinks on a Friday to create that Friday feeling still!

Our thanks to Stephanie for this incredible interview - we’re looking forward to seeing her company go from strength to strength in the future! For more things Brikl, head back to our blog.